Brandi Kosiner was kind enough to interview me for her excellent blog, Blkosiner's Book Blog. We chatted about which character I'd most like to have dinner with, what book I'd like to inhabit for a day, and whether pirates are cooler than ninjas! Check it out, and while you're there be sure to read some of her other fun reviews and to sign up for a chance to win a free copy of Darkride!
Posted by Laura Bradley Rede at 2:15 PM No comments:

Some Thoughts On Breaking Dawn

Cicely says that "there are mall people and there are library people", and I am generally a library person. Anyone who has read Darkride can probably guess how I feel about the Mall of America, the biggest mall in the US, which is only minutes from my house. In fact, you might think that no amount of money (or heartsbane, for that matter!) could get me to go to the MOA - especially in the middle of the night! But last Thursday night, that's exactly what I did. I headed out to the mall for the midnight premier of Breaking Dawn. It wasn't my first time at the MOA at midnight; I have gone to two other Twilight movie openings there. But it was my first time there since I wrote the MOA scene in Darkride, so this trip made a special impression. I want to tell you all about it, but first a few thoughts on the movie.

I'll admit, even though I was psyched to go to the midnight opening, my expectations for the movie itself were not that high. After all, Breaking Dawn was my least favorite of the Twilight books, the one where it sort of jumped the shark a little and where the politics of the books really began to intrude on my enjoyment. I say this as a true Twi-hard, of course. I love the Twilight Saga like I love a Snickers bar: I know it's not good for me, but I revel in every sweet, nutty bite. I pride myself on being an early adopter of Twilight; my friend the book rep gave me an ARC of the first book and I was recommending it to friends before anyone had ever even heard of it. I even brag that I have an advanced degree in Twilight (Okay, it was only a six week course, but it was a good one!) and I dream of going to Forks. But I still wasn't sure Breaking Dawn would work for me. Luckily, I would say that, for the most part, I was pleasantly surprised. Here are a few things I liked:

--People watching! The fun of going alone to the midnight opening is being able to eavesdrop on the people around you and watch the crowd. This bunch wasn't as fanish as I had expected (very few t-shirts, and not one wedding dress in sight) but they were interesting. For one thing, it was an older crowd than I expected. When I've gone to Twilight openings in the past, there have been more teens and tweens there with moms, but this bunch seemed to be largely 20-somethings (maybe folks who were teens when the Twilight phenomenon started?) Since the MOA has a bar right in the movie theatre, this made for s tipsy crowd! The audience was also more racially diverse than I expected. I remember past crowds as being more white, but this time there seemed to be more Native American and Latina folks, and I had to wonder if that was because of the media attention paid to the Native American wolf-pack actors. Whatever the reason, it was nice to see. (The guy and girl behind me in line were shifting fluidly between English and Spanish. At one point I heard her ask him if he knew anything about the books. He said, "All I know is the guy with corto pelo got buff." :)
--Being able to see the Snow White and Hunger Games trailers on the big screen!
--The fact that the acting has improved. Kristen Stewart seems to have broken the habit she had of saying a line, pausing to act, then saying the next line. She now seems to be able to emote and speak simultaneously, which makes the pace much quicker! Robert Pattinson has improved, too. He is actually finding Edward (after three movies) and seemed much more comfortable.
--More humor! Some of it unintentional (when Edward broke the headboard of the bed during the honeymoon scene, the audience nearly died) but a lot of it an intentional attempt to lighten the mood of an otherwise dark movie. The wedding toasts, in particular, were brilliantly in character.
--The flash-back of Edward in the 1930's, when he was preying on human villains, was particularly nice, with a colorized feel and a non-sparkly vampire edge to it.
--The wolf pack, and particularly Leah and Seth, are very believable.
--Jacob's emotional moment was a long time coming and well done.
--They cast the perfect actress to play Renesme in the flash-forward vision Jacob has when he imprints. (A strange moment, no matter how you look at it, but at least they tried to make it feel a little more appropriate by showing a vision of Renesme as she would look as a teenager, so that the sexualized/romanticized feeling of the moment wasn't focused on a baby!)
--The attempts at pointing up the pro-life/pro-choice debate. They tried to make it explicit by having Alice use the word "fetus" and Rosalie correct her, "It's a baby! Call it what it is!" This happens not once, but twice. The word "choice" is also used very intentionally through-out.
--No one sparkles in the whole movie. Not even on the beaches of Isle Esme.
--The final shot is great. I won't spoil it, but it hit the right ending note.

-- I'm not a fan of anything starting with voice-over.
--They seem to make Alice more of a shallow fashion-doll in every movie. Alice is my favorite character and in the books she has a strong personality and she and Bella have a very real sisterly relationship, but in the movies she really gets reduced to shopping for shoes.
--Did the wolves get smaller? In the books, they are the size of horses. In the last movie, they looked big enough to ride on. In this movie, they look like someone shrunk them in the wash to roughly the size of black bears, or maybe even - gasp - wolves! Is this some effect of global warming that no one told me about? Also, I didn't think the wolf CGI was as realistic in this one, which is sort of a big deal, since they do an entire scene with the wolf pack in wolf form, communicating only through their telepathic link.
--Bella had to be painfully thin during the pregnancy scenes. As a result, she was also quite thin in her non-pregnancy, "healthy" scenes. This made me worried. I have struggled with an eating disorder in the past, and I can easily see someone who admires Bella being "triggered" (having her eating-disordered tendencies set off or encouraged) by Bella's weight loss in this movie. I imagine that Bella related "thinspo" or "thinspiration" (photos of extremely thin women shared among anorexics and people who have anorexic tendencies online) are probably all over the internet right now (I'm guessing about this. I don't actually dare look). The movie doesn't exactly glamorize this thinness - Bella is dying for most of the movie and meant to look horrible - but I still worry. Take good care of yourselves, my fellow Twilight fans! Be gentle with yourselves.

I'm sure other things, both positive and negative, will come to mind - especially since I'm sure I'll see the movie again! But actually my favorite moment of the evening wasn't in the movie at all. It was when we were leaving the theatre. I found myself surrounded by a bunch of twenty-something girls, all hyped up on adrenaline and chattering excitedly about vampires, and I felt like I really could be Cicely in the Mall of America scene of Darkride, surrounded by thralls. As we reached the landing, one girl in front of me paused to look out over the still and dark amusement park. "Kinda eerie, isn't it?" she said.

"Yeah." Her friend smiled. "But it would make a hell of a place for a game of hide and seek!"

Seriously made my night :)

Here are a few pictures I took over looking the amusement park at about 2:30 am. They aren't the best pictures, but I still wanted to share them with you! 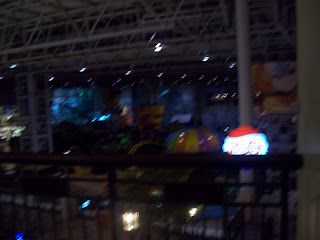 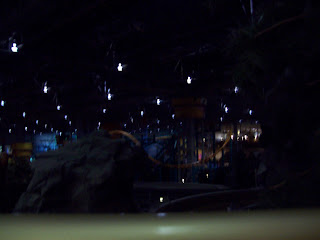 "My work has always been in process.  Finishing a dance has left me with the idea, often slim in the beginning, for the next one. In that way, I do not think of each dance as an object, rather a short stop on the way."  -- Choreographer Merce Cunningham

I ran across this quote today while working on outlines for Crossfire, the second book in the Darkride Chronicles, and I really identified with the sentiment. I think that anyone who writes a series hopes that each of the books will feel complete in and of itself, but that they will also feel like part of something bigger. We want them to be snapshots of something in motion, moments in the lives of the characters - lives which hopefully go on even off the page. This quote has given me something to think about while I scribble my notes (and clean my kitchen, and go over Darkride copy edits and do all the other things I have to do today!) I am excited for the next stop on the way!
Posted by Laura Bradley Rede at 9:05 AM No comments: