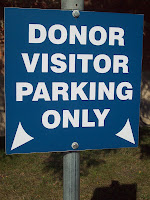 So, in honor of the start of our Bloody September giveaway - and to try to do my part to help solve the national blood shortage and embrace my inner thrall - I donated blood yesterday, for the first time ever! I'll admit it: I was a little nervous because I wasn't sure what to expect. Even though I've never had a problem with seeing blood  (I inherited my ER doctor father's stomach of steel) I couldn't help worrying that I might pass out in the donor chair, which would be a little embarrassing for someone who spends all her time writing about vampires! I wanted to earn my thrall cred! 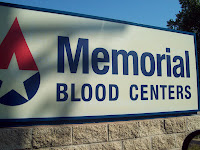 So, I was a tad shaky going in, but the folks at Memorial Blood Centers put me at ease right away. The receptionist gave me printed copies of any restriction on donating (for example, you can't donate if you are taking certain medications) to read through as I waited. Then my nurse, Kelsey, lead me back to a little private room where she tested my blood pressure, did a quick finger-prick on my middle finger, and put the blood sample in a cool little machine that tests your iron level (mine just barely squeaked in! Note to self: Eat more spinach!) Then she left me in privacy while I answered a bunch of questions on the computer about my health history, sexual history, and places I had traveled. Since none of my answers disqualified me from donating, I was good to go! 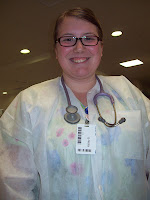 Next, Kelsey lead me to a room with several comfortable reclined chairs (like at a dentist's office) where other folks were donating. (Most of the people I saw donating were obviously regulars who had done this many times before, and they were casually chatting on their cell phones or reading newspapers as their blood was drawn.) She assessed my inner elbow and told me I had "great veins" (which I'm sure is a huge compliment at the Nightlife!) and swabbed a spot with iodine to prep it. Then she told me I could look away while she slipped the needle in. I expected that part to hurt, but actually I only felt a tiny pinch when the needle went in, and then I couldn't feel it at all. She covered the needle site, and kindly offered to cover the blood tubes and bag, too, if it would make me more comfortable, but I actually thought it was kind of cool to watch the blood going in. She showed me how to squeeze a rubber hand grip every 5 seconds or so to keep the blood flowing, then went to attend to other patients. 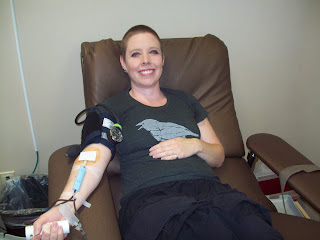 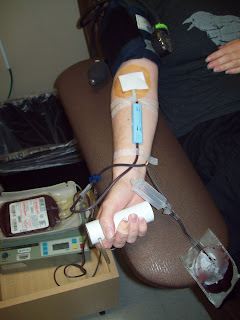 Waiting for the blood collection to be complete was actually kind of Zen and relaxing, and it was over fairly quickly. Kelsey gave me pamphlets on blood types (I'm B- which is rare - only 2% of folks in the US have that blood type - so I felt kind of special) and told me not to skip any meals, to drink plenty of fluids, and not to do anything strenuous for a few hours. I retired to the lobby for a granola bar and a box of raisins feeling like I was, as Kelsey said,   "The perfect donor!"

I'd love to end the story there, but the truth is, I had another first yesterday: I fainted. After donating, I drove myself home with no problem and was feeling fine, but about a half-hour later, when the adrenaline rush of donating wore off, I broke out in a cold sweat and had to put my head between my knees. A little while later I felt better and stood up - but evidently I wasn't completely better because I actually did faint. Luckily my partner was there to catch me and soon after I was fine. (Just a little embarrassed. I felt like a Victorian lady who needed smelling salts - or, better yet, a thrall who needed Juice! I'm not sure I'd make it at the Nightlife...) I don't tell you this to discourage you from donating blood, but more as a cautionary tale: I didn't drink enough after I donated and didn't take it easy. The next time - and there will be a next time! - I'll take it slower and push the OJ. 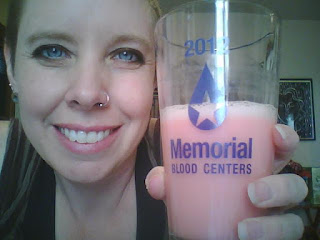 All in all, donating only took an hour of my life, and it may have added years to someone else's. With the national blood supply the lowest it has been in 15 years, all eligible donors need to step up. Just think about how Cicely let Luke bite her to save his life, and know that you'll be providing the same kindness to someone else in real life. (Okay, probably not someone who has been attacked by a werewolf, but you get the idea.) Plus, if you donate in the month of September, you can enter the Bloody September giveaway for a chance to win amazing paranormal books! Win-Win! So what are you waiting for? Make your appointment already!
Posted by Laura Bradley Rede at 1:29 PM