Yay! I can finally share the cover for my upcoming New Adult paranormal romance, Kissing Midnight! This cover was designed by Damon at damonza.com, and I love it deeply. I really feel like he captured the feel of the book, which is a dark modern fairy tale full of ghosts and curses and deception and true love. Tell me, what do you think? 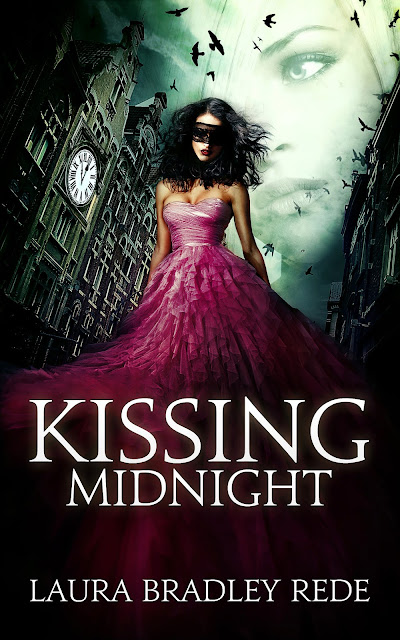 Want to know more about Kissing Midnight? Here's the blurb:

Deveraux Renard is the perfect boyfriend: perfectly handsome, perfectly charming… perfectly deadly. He has to be. Dev is immortal, but with a catch: Every year he has to make a new girl fall in love with him and kiss her at midnight on New Year’s Eve. That kiss renews his life for another year – and ends hers forever.
This year, Mariana “Saintly” is the lucky girl. Of course she doesn’t know it. Saintly thinks New Year’s Eve is a chance to move beyond the tragedy of her brother’s death and focus on her first year of college. She doesn’t suspect her boyfriend’s secret – and he doesn’t suspect hers: Ever since her brother died, Saintly can see ghosts.
And one ghost in particular is dying to be seen. Twenty years ago, Jesse Hayden jumped off the campus clock tower because she was convinced that she’d never find true love. Now that she has met Saintly, she’s sure that she was wrong.  She’s determined to save the only girl in the world who can see her, but can she get Saintly to trust her in time?
Trust the ghost girl and live.
Trust the immortal boy and die.
Saintly has until midnight to make her choice, and the clock is ticking.


Many thanks to Jaidis Shaw at Juniper Grove Book Solutions for organizing the cover reveal, and to all the bloggers who participated! To enter her GIVEAWAY to win signed paperbacks or ebook copies of Darkride, hop over here!
Posted by Laura Bradley Rede at 5:59 AM