When I chose the title Darkride I had no idea how appropriate it would turn out to be. The journey of writing this novel has truly been a long, dark trip -  but one I would take over again in a heartbeat. This page is meant to give you a glimpse behind the book at some of the details that helped me tell Ander, Luke and Cicely's story.

Under Cover
I was thrilled when my friend, photographer Rhonda Kist, signed on to do the cover photos for Darkride. I had seen her work and I knew that she had a beautiful eye for light and a knack for setting people at ease in front of the camera. And I was equally thrilled when my niece, Sage Rory Magee, agreed to play the part of Cicely for the shoot. Sage had been one of my inspirations while I was writing the book, an example of a teenage girl who was strong and vulnerable and real. So Sage (who changes her hair color all the time!) agreed to stay brunette for the shoot and Rhonda agreed to work in a graveyard and I set off on a quest for the perfect red hoodie. (The hoodie was all-important to me because Cicely's red hoodie is her comfort item and because the book is full of fairytale references and I wanted an image that would bring to mind Little Red Riding Hood.) So, perfect hoodie in hand, we set off for Lakewood Cemetery in Minneapolis. 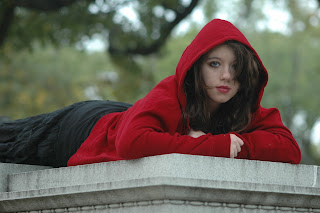 The shoot itself was extremely fun. All three of us pitched in ideas for settings and poses. Sage was a natural in front of the camera -  so natural, in fact, that at times I felt like I was watching the real Cicely! Sage was daring, too: we asked her to climb up on   top of a huge tomb, which she did -  in combat boots and ankle-length skirt! 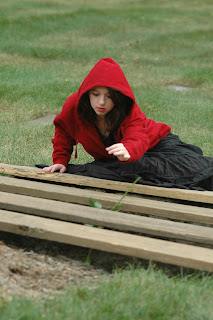 Soon after that, we walked up a hill and nearly stumbled into a freshly dug grave! It was truly six feet deep and only covered with a few planks of wood. Seeing "Cicely" look down into it was enough to give me chills (for reasons that will be pretty obvious if you've already read the book!) We asked Sage to drop a rose into the grave. Hopefully it will be a little offering to the spirits of that place. 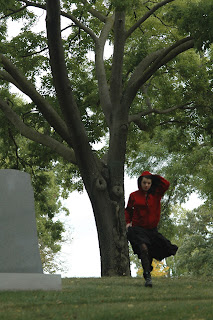 After that, we decided to get some shots of Sage running. We directed her to imagine that she had been spooked by an eerie noise behind her. The only trouble was, once she started running, a real eerie noise, a strange creaking sound, began and we were asking Sage to run right towards it! The fear on her face in those pictures is real and, even though we eventually discovered that the creaking was a swaying tree limb (and not an opening crypt door!) there was nothing to explain why the limb was moving when the air was perfectly still. Needless to say, those were our last shots of the day and we raced out of the cemetery just as it began to get dark. Luckily we had more than enough beautiful shots to choose from! Take a look at the proofs from the shoot and I think you'll agree. My only regret about the shoot? We couldn't have Luke and Ander there, too! Well, maybe next cover, guys...

Dark Riding
Like my character Cicely, I am a huge horse lover. I started taking riding lessons when I was eight years old, rode through high school, and miss it badly today. So when it was time to give Cicely and Luke something in common - and something romantic they could do together -  of course I imagined them galloping through the woods. With Luke's dramatic tastes I knew he would settle for nothing less than the majestic black Friesian.  If you want to see why, check out this beautiful video tribute to these powerful animals. I think Luke would approve.

Music of the Night
I'll be the first to admit that most people don't slow dance to opera. But then, Cicely and Luke aren't exactly most people, and as soon as I heard Rachmaninov's "In the Silence of the Secret Night," I knew it was something that would speak to Luke and remind him Deirdre, the girl he loved and lost.  After all, Rachmaniov wrote it when he was only a teenager himself, as a tribute to a girl he was forbidden to date, a girl he called "my little psychopath." Here is a video of Dmitri Hvorostovsky singing "In the Silence of the Secret Night" in Russian. You can read the lyrics in English and imagine how it must have been for Luke to hear Rachmaninov himself perform this a hundred years ago as Luke sat mourning Deirdre, struggling to "banish from his mind her artful words." If you'd like to hear it sung in English, here's the beautiful Kathleen Battle's performance. "I will wake the darkness of the night with your sacred name..."

The Spanish folk song that Luke sings for Marcus only exists in the vampire world, but its closest human equivalent might be the haunting Cancion de Amor, sung here by the Sandpipers. This song makes me swoon.

And then, for something completely different, there's the song Emmie sings at the vampire blood bar the Nightlife, "Someone to Watch Over Me." Emmie would be the first to tell you that vampires are a nostalgic bunch. They live a long time and have a tendency to idolize the past, so the Nightlife is sure to mix a good selection of old standards into every night's show-- especially when someone like wealthy Brace Belden is making the requests! Here's Lena Horne singing this classic Gershwin tune. Try to imagine it in Emmie's sweet Southern drawl! I felt like this song was perfect for Emmie, the old fashioned romantic who longs to bond with a vampire, but it's ironic, too, because the vampires of the Nightlife are not always inclined to watch over you and keep you safe, and Emmie and the other thralls are anything but innocent little "lambs lost in the wood"!

And what trip to a vampire blood bar would be complete without "I Don't Care if the Sun Don't Shine?" Here's Patti Page. "It's no fun when the sun's around, but I get goin' when the sun does down..."

And last but not least, one of my favorite songs plays on the car radio as Luke kidnaps Cicely for their mystery date. What's a better bonding song than "You Really Got a Hold On Me?" Here's Smokey Robinson and the Miracles singing "I don't want you, but I need you..."  Yup. Sometimes that says it all. 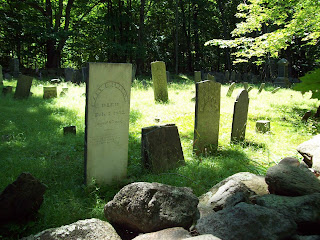 Although Darkride takes place in the small town of Monument, Minnesota,the graveyard behind Cicely's school was inspired by the graveyards in my own little home town of Kittery, Maine. There, almost every little church has its own plot of mossy gravestones, some dating back to the 1700's! When my partner Marcy and I were first going out we used to go picnic in the peace and quiet of the graveyard near my house, so it made perfect sense to me that Ander and Cicely would find a way through the wrought iron fence around the graveyard behind the church at St. Agnes. Here are a few pictures I took the last time I visited Kittery. I actually think this little graveyard is one of the more beautiful places I've seen. Can you picture Deirdre's angel in the middle of it all? 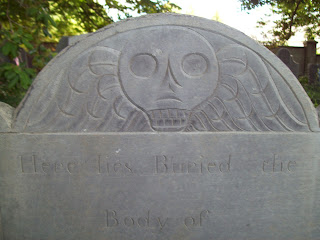